Georeferencing properties are set in a dialog which is available from the menu Map > Georeferencing…. The dialog is divided in four sections: Map coordinate reference system, Reference point, Map north, and Scale compensation. 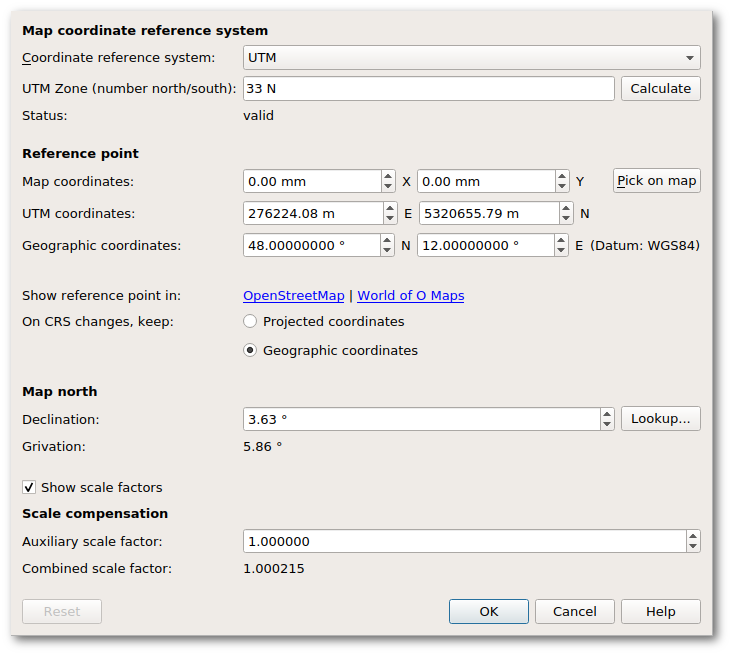 In case you just want to load some GPS tracks, you can safely use UTM, which is widely used world-wide. Other choices are:

Depending on the selected coordinate reference system more settings may show up. For example, for UTM the zone number must be given in addition.

Settings in this section define the reference point, which is a point for which coordinates in all of the involved coordinate systems are known. It acts as the anchor between the different coordinate reference systems.

In case the georeferencing dialog is triggered by loading a georeferenced template in a map which is not georeferenced yet, these settings are probably already pre-filled with sensible values (assuming that no other map objects exist yet), so they do not need to be changed in this case.

The Map coordinates field shows the map paper coordinates of this point. To change them, use the Pick on map button. The georeferencing dialog will then be hidden until you select a point on the map (left mouse click) or cancel the selection process (another mouse button). Changing the reference point on the map will not affect the other sections.

The next set of coordinates gives the reference point east-west and north-south position in projected coordinates, for example in UTM or Gauss-Krüger coordinates. Unless working with local coordinates, changing easting or northing will update the geographic coordinates. Easting and northing are given in meters.

The Datum field shows the datum the geographic coordinates refer to. This is especially relevant for the longitude.

The second last line in the Reference point section contains hyperlinks for opening the reference point in OpenStreetMap or in the World of O Maps directory.

The last option in this section determines which coordinates will be recalculated and which stay equal when changing the coordinate reference system.

In the Declination field the angle between true north and magnetic north at the position of the map has to be entered to make magnetic north be at the top. This can be looked up from an online accessible model as soon as the reference point geographic coordinates are entered, however it should be checked with a precise compass if accuracy is required.

Auxiliary scale factor may be set to compensate when distances on the ground differ from distances on the Earth model, such as occurs when the terrain is at high altitude. It is the ratio of model distance to ground distance. The default factor of 1.0 has no effect. Beside that, Mapper automatically calculates the grid scale factor, which accounts for the difference between projected distance and model distance. Mapper puts this together with the auxiliary scale factor, to form the combined scale factor.

The default, basic Georeferencing dialog is lacking a few of the above-described options that are not generally needed. The settings (menu File > Settings > Georeferencing) can enable these advanced features.

The (mouse) cursor position of the map editor can be displayed in map coordinates, projected coordinates or geographic coordinates (decimal or as degrees/minutes/seconds, DMS). The coordinates of the cursor on the map sheet are discussed here.