Since the release of the alpha version of OpenOrienteering Mapper some progress was made, so it is time again to present the latest advances. One thing I’m particularly happy about is that various developers already contributed patches to the program. Most notably Pete Curtis joined the project and has been doing great work on file import/export. This of course includes the most requested feature, conversion to and from ocd files (currently, version 7/8 only). You can see a work-in-progress screenshot of the ocd import here: 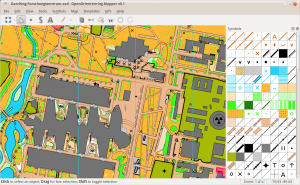 Other than that, work is going on to implement the essential map edit operations. Since the release of the first alpha version, the following features have been added:

And, of course, a lot of bugs have been fixed. The release of the next alpha version is planned when ocd import (and maybe export) are working well.